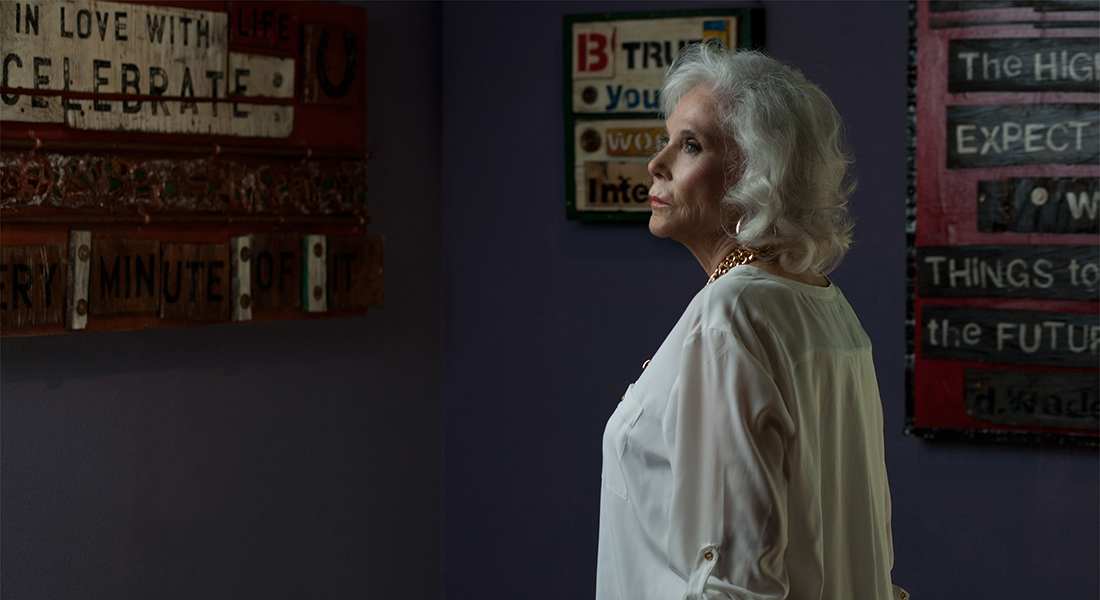 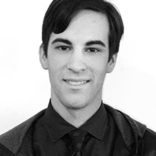 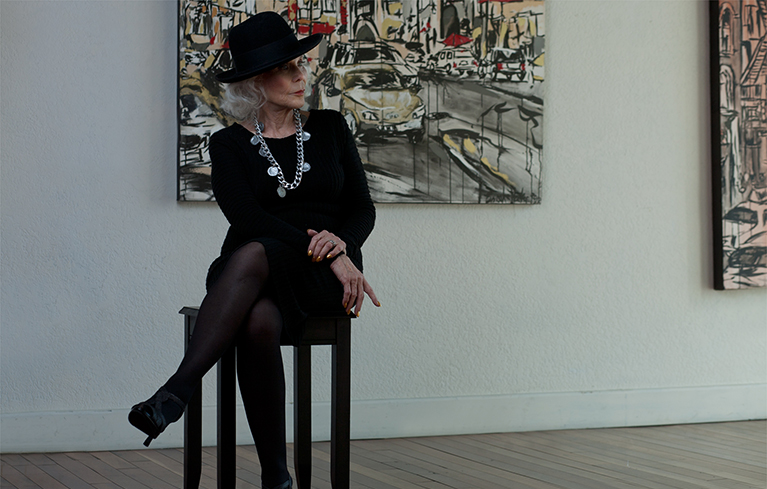 In answer to my question as to whether she thought there was a particular role for women, she commented: “I don’t think there is a single woman-specific role for us.” Elaine Madsen is a woman of success, struggles, love, friendship, wisdom and hope.

She walked into the photo shoot wearing a narrow black sheath, a chic black fedora and a beautiful silver necklace around her neck. She sat on a couch at the Jeanie Madsen Gallery in Santa Monica talking about the inspiration for I Know a Woman Like That, the documentary recently produced
with her daughter, Virginia Madsen.

“The inspiration for it emerged in a conversation I had with my daughter, talking with her about a dear friend [Dorothy] who had passed away —who was smart, politically engaged, and creative. “I said to my daughter: ‘I hope someday you have a woman like that in your life.’ And she looked at me and said, ‘I do know a woman like that, YOU are a woman like that.’ That is how it began.” Because of that conversation, Elaine and Virginia embarked on a journey to show audiences “women like that, why they are like that, and how to never give up on what you love to do.”

I Know a Woman Like That explores the lives of sixteen women who’ve maintained the passion to live life to the fullest. “Bettie Davis said once, ‘Getting old is not for sissies,’ and that is for sure.” Madsen elaborates. “But that is not all it is, there is a new kind of freedom with being older.” One woman who particularly inspired Madsen was Lucille Borgen, who was a 95 year old water ski champion at the time she was filmed. Lucille’s passion reminded Madsen of one of the first jobs she had working for a church. Applying for the job as educational assistant, she was told that she could have the job, but because she was married would receive half the salary of the person she was replacing. She explained: “Accepting that requirement without question was just a sign of the times.”

It did not occur to her to protest this reduction as unfair, because the feminist movement was not yet in full swing in her own consciousness. But, because Madsen took that the job, she was led to further education and later into a successful career. “Life doesn’t come easy, you have to fight and strive for what you want,” she continued. Madsen did exactly that: pushing forward, growing everyday into further competence in marketing, writing, and journalism, as well as in her role as a mother. She speaks the truth passionately and beautifully in her new book Crayola Can’t Make These Colors. “A lot of the writing in that book was prompted during a time that I was deeply depressed.”

One poem in particular, ‘The Hospital Called’ came from the loss of her first child. “That is something that never heals. Because I lost that child I made an effort to create moments and memories with my children. The loss of that child was actually a terrible gift. Because of that I never missed a moment of my living children’s lives.” Madsen doesn’t feel prompted to explain to someone about why she wrote a poem a certain way because she wrote it, first of all, for herself.

She says, “I never feel the poem is someone who had feelings she dared to express.” With so many other inspirational writers and poets on the scene, Emily Dickinson still stands out the most. Away from the writing, away from the filming, Madsen enjoys the time she has with her family. “One of my grandkids calls me Google, because he thinks I know everything.”

She still creates memories with her family and loves it that her family respects her. “They still ask for my opinion about things. Best of all, I see that memories I made with them as children are things my adult children ultimately incorporated into their own children’s lives. That touches my heart dearly.”

Elaine Madsen left the interview with one key phrase, “Don’t limit yourself to one direction. Take time to look and see what’s before you, because there are things waiting for you that haven’t yet been revealed. Those will be the things you don’t want to miss.” Photo Credit: Featured image. Painting: Chinese Mann Theater, Brooke Harker. Clothing: Original Jeanie Madsen Design 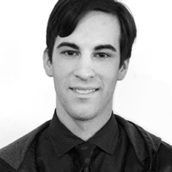