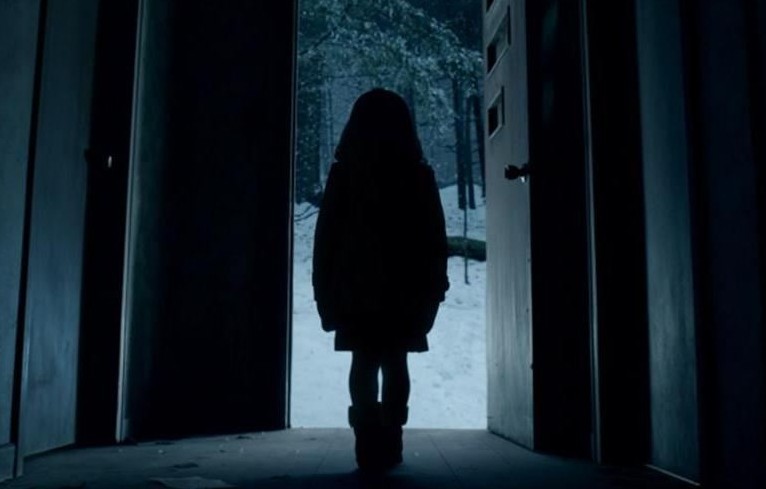 “Guillermo Del Toro Presents:” has a nice ring to it. Although this film does have a few nods to horror films before it, it is mostly derived from and expounded upon by Director Andre Muschiettis’ 3-minute short film, of the same name, Mama.

Having a presenter such as favored creature-designing wizard like Del Toro is a good push to get those butts in seats. But this film also benefits from strong acting, Jessica Chastain (The Help, Zero Dark Thirty), roots in early cinema (Moth Light 1963), and unsettling scenes that suck the warmth from your bone; Smart Horror.

The story begins as a man during the 2008 financial collapse, kills some people from his work, comes home to repeat the act with his ‘estranged’ wife, and drive off with his kids. They seek shelter in an abandoned cottage a little off the road. With the father killed, the girls (ages 5-3) are left to raise themselves for 5 years, along with some help from ‘Mama’.

Mama is an entity, which becomes a visual/physical reincarnation of a moth from time to time. Moths almost have a second life, living first as caterpillars, cocooning (which can be seen as dying or entombed), only to rebirth as a moth to live out the rest of their life. Which dually is represented here with ‘Mama’, the entity, and the film. Stan Brackage made an experimental film entitled Moth Light (1963) about the life given to that, which has passed, through the magic of cinema. On 35mm Mylar film, he used translucent objects such as blades of grass, flower petals, and most(ly) important moth wings. With the fast paced projection of these copied images, it gave life to the then dead wings, allowing a fluttering from slide to slide of wings. Cinema allowed these stale and motionless wings life again, and could preserve them by being shown again and again. Cinema had given life to these dead elements and preserved that life, just as we can watch films of actors that have gone and passed.

Not only was Muscheittis’ film brought back to life from being a 3 min short to a feature length film thanks to Guillermo Del Toro. Thus bringing back to life the entity through the power of cinema once again.

I’m not much of a horror film type; I’m really excited for the new Evil Dead, and enjoyed Daniel Radcliffs recent post-potter film The Woman in Black. But for the most part I find them to be lacking in story, overly gorey, and the little amount of jump scenes barely keep me interested. This film is not like that, it’s smart with how it handles its scenes. Keeping the viewer constantly unsettled with watch they are watching. Some of the scariest scenes can tend to be what you don’t see (The Silence of the Lambs), or it can be something you know is coming but still have a hard time waiting for that moment to come and scare you (Signs, the birthday party scene).

If you’re like me, and have a girlfriend who can’t get enough of these typically overdone, rehashed horror films Hollywood has to offer. At least treat yourself to one that is worth your money. Go see Mama, but before you do watch the 3 minute short, and see what all the fuss was about. It’s amazing the vision that can be taken from such a small amount of material. With strong roots in classic horror and cinema alike it makes for a good movie. Del Toro presents, and I recommend Mama, for those of us who can appreciate a good script, and a few scares.