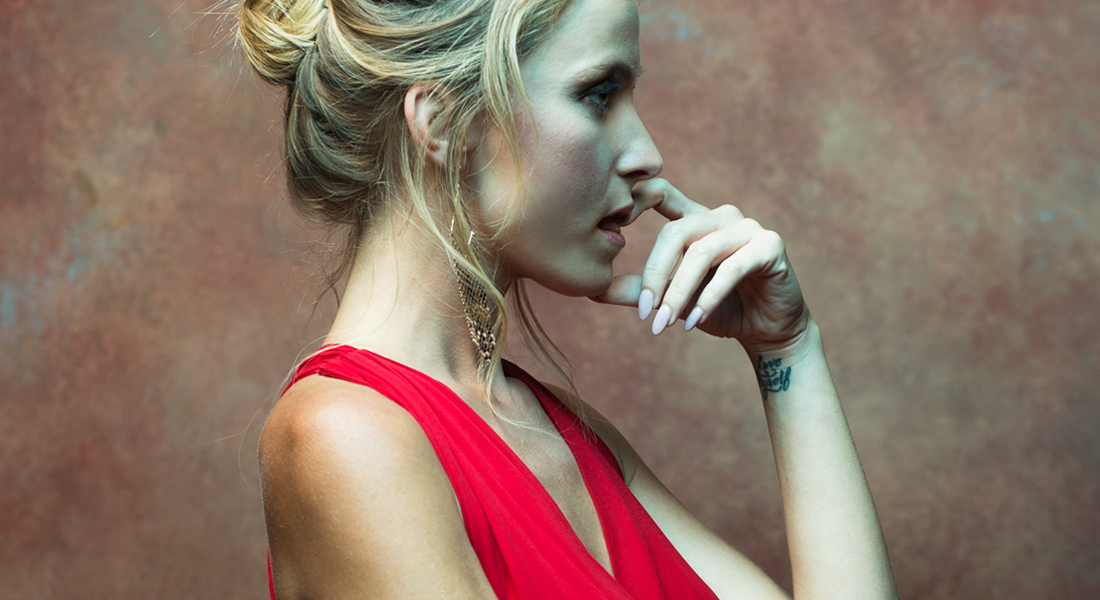 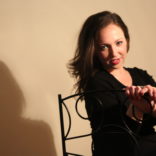 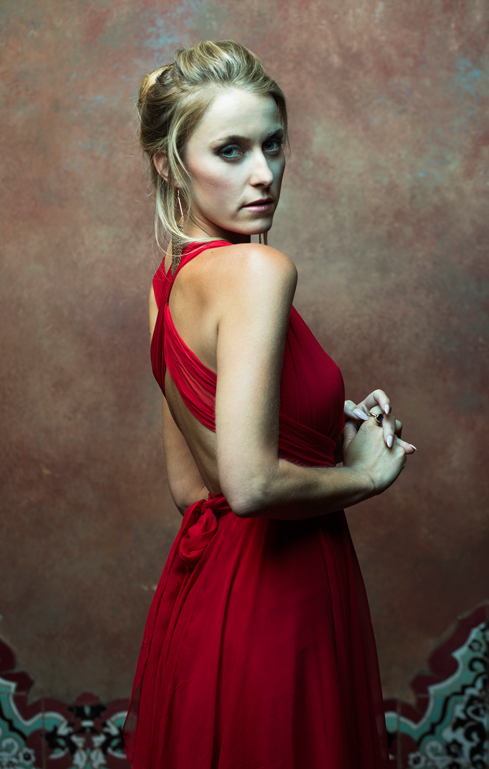 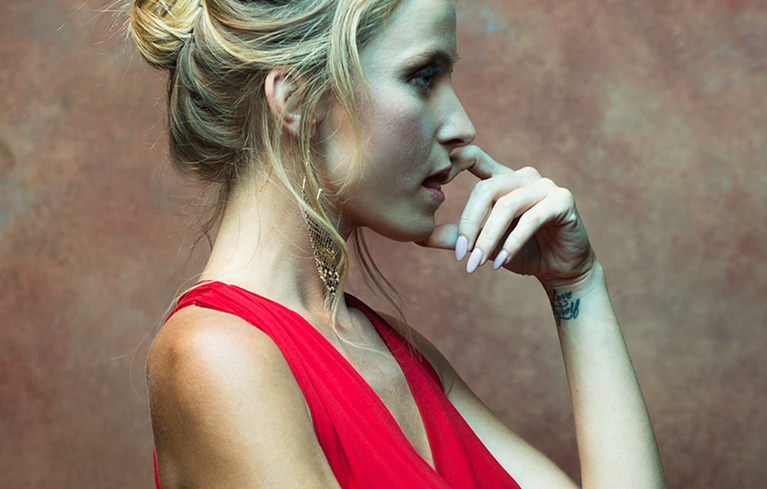 Sadie Katz will only watch a horror film in the daylight—with her hands halfway over her eyes.

Katz, horror’s it-girl and star of the upcoming Wrong Turn 6: Last Resort, says that, while you’d never catch her watching a creepy movie alone at night, that doesn’t mean she doesn’t love a good scare.

“I like horror films,” says Katz. “Especially like [the Wrong Turn series] because they are wildly imaginative.”

“[The film] is like a reboot of sorts,” says Katz. “Normally, you get to number six and they kind of go like, ‘Oh here we go with number six, this is kind of embarrassing, let’s push this through.’ [The cast] all just took it as seriously as you could. I don’t want to say ‘seriously’ in a pretentious way. We said, you know what, let’s do this like they did Nightmare on Elm Street.”

“[While filming] I kept doing this monologue to myself from Cat on a Hot Tin Roof,” says Katz. “[It] doesn’t really have anything to do with [the scene,] but it did for Sally—a certain kind of pain and feeling a sense of entitlement and wanting something more. It helped me find that character.”

Katz, who also starred in last year’s House of Bad, says the intensity and range of emotion evoked in horror films are what makes her love filming them.

“In a horror film you can do a scene that is a love scene, and then a scene where you’re laughing and joking around the fire,” says Katz. “And then the next scene, you’re like screaming for your dear life. There’s a scene where you have to cry on cue, and then you’re doing a love scene that’s at the end of your life. The highest stake you can raise is life or death scenarios, and now we’re talking life or death in the most insane way.”

“There’s something really provocative and crazy about lying there naked on the floor, screaming and crying,” says Katz. “That’s primal! It is even crazier as a female. There’s something awesome and empowering about playing this really assertive female. If you get to play that kind of powerful character like Kathy Bates in Misery or Jessica Lange in American Horror Story, there’s something that ignites in you—you’re like ‘wow!’ And then you do it in front of 150 crew members, and it’s like the Grinch: his heart grew two sizes bigger that day!”

It’s certainly taken a lot of heart for Katz to get to where she is today; she says she still vividly remembers wanting a part in her high school’s production of the musical Grease.

“I thought I was gonna die if I didn’t get a part,” says Katz. “I ran up and they used to post the list on the board of what part you got….I remember my heart pounding in my head and seeing my name and being like ‘Ahh, now I can die happy!’”

Trying to make it big hasn’t been all the glitz and glamour high-school Katz imagined, however. She recounts grueling days of filming and frustration with the weird machine that is the film industry, but ultimately she says that she is thrilled to be doing what she loves to do. Ever since she watched The Wizard of Oz, Katz says that she has been “mesmerized” by film.

“Acting is the only constructive place where you can scream at somebody and people can be like ‘that was amazing’,” says Katz. “And you’re like, no, actually I am just really messed up and you gave me a line to express it, which is kind of bad in your real world. When you’re an indie film actress— I don’t just do horror films, I do other films too—it’s not like everyone knows our name or anything at all. Some people, we’re a big deal, and to some people they’re like ‘who?’ You’re just stuck in this alternate world of pursuing acting, but not being a big deal, but being a big deal one day, and then [that is] the only thing you know how to do—it’s the only thing that makes sense to you—being an actor.”

Labyrinth and The Never Ending Story are also on Katz’s list of favorite childhood movies, both of which she was able to see recently at a fantasy-themed movie showing at Los Angeles’ Hollywood Forever Cemetery, one of her favorite spots. She loves a good night out, and discovering new restaurants and flea markets around LA, but lately her time is being monopolized by the man in her life.

“I have a 13 year old [son] who’s really into football right now,” says Katz. “So having a jock for a son has really taken over my life. It’s so crazy I’m like, ‘Why is he taller than me and who is this man living in my house?’”

Katz says that she enjoys being on the other side of production, too, as a screenwriter. She penned Scorned, a revenge-filled thriller, released in stores February of this year, and she is currently working on a documentary featuring actor Bill Murray.

A big fan of Murray’s, Katz says that she also goes fan-girl for novelists.

“I do love a good book, I really do,” says Katz. “I really love to brag about books. I get so obsessed with authors of books that I always have to find them on Twitter and Facebook and write them. It’s embarrassing. Sometimes they’ll write back and I’m like, ‘Is it them writing me back, or a publicist?’”

She’s quick to rattle off a list of must-reads; as she does so, she remembers that she has another movie just out in stores—Chavez Cage of Glory. Katz says that she plans on scooping up a copy at a local store right away.

She’s excited to add another of her movies to her collection at home, inspired by a piece of advice that her mother gave her: “She said, you know Sadie, you would’ve been so proud of yourself at age 12.”

“If someone would have told me ‘You’re going to be a star in a movie that’s going to be at Walmart,’ I would’ve been so grateful,” says Katz of her younger self. “I wouldn’t have compared myself to [anyone]. It’s like yoga: stop comparing yourself to other people and be proud of what you’ve got. So I wish in my 20s I would’ve just stopped thinking that I had to have an Oscar to be great. I’m proud of myself, and not many people get to star in a movie; I got to do that. And that’s pretty rad. I can’t wait to go down to [the store] to snag [my movie] off the shelf, and put it right on my wall of fame in my house and be like, ‘I’m the lead in that. I wanted to be a movie star, and you know what? I got to be a movie star.’”

Wrong Turn 6: Last Resort debuted with positive reviews in August at the UK’s Film4 FrightFest film festival. Catch Katz on store shelves with the US release on October 21, just in time for Halloween.