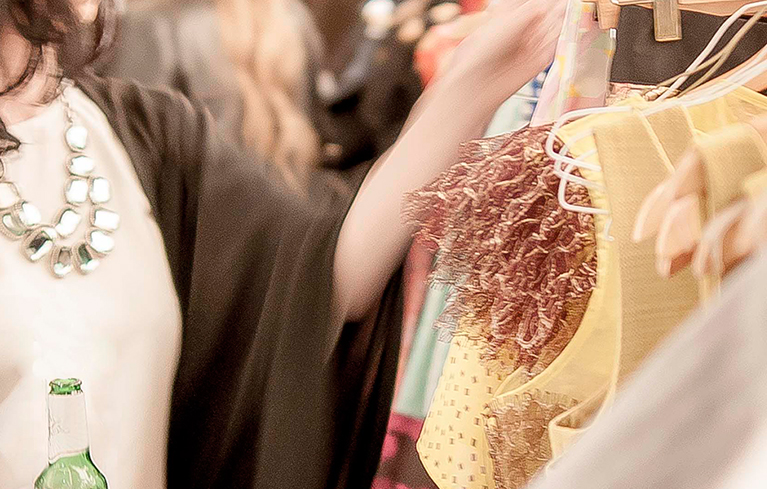 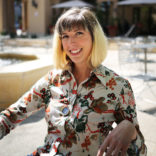 The Godfrey Hotel’s IO Urban Roofscape was humming with anticipation for the debut of local designer Anastasia Chatzka’s Spring and Summer 2014 collection. After training with some of the nation’s most innovative designers in New York, Chatzka returned to Chicago to focus on her own brand and image. Since then her creative genius has caught the attention of fashion blogs such as Fashionista Chicago, Racked Chicago, and DNAinfo. Although she started with a concentration on eveningwear, Chatzka has since broadened into ready-to-wear pieces that are carried in designer boutiques across the country.

As I entered the IO Urban Roofscape I was disappointed but not surprised to learn that it was standing room only at that point. Although I had only learned of Chatzka a few weeks before, I was already an enthusiast and was thoroughly anticipating the show.

As the show began, the first few looks down the runway took me by surprise. They were darker and edgier than previous work I had seen by Chatzka. When I spoke with the designer later, she mentioned that starting with the darker looks was her way of breaking away from a misconception that she only works with vivid colors. These first looks didn’t seem out of place or forced; they only served to further showcase Chatzka’s broad artistic scope.

As the show continued, viewers were treated to a magnificent array of colors, textures, and silhouettes that are commonplace in Chatzka’s work, although fresh and updated for the new collection. Signatures of the collection include lace, mesh, metallic beadwork, and simple, yet classic circle skirts. Some of my favorite looks paired cropped mesh tops over feminine dresses. Chatzka has a gift for combining strong elements in a way that is both innovative and pleasing to the eye.

Even the heavy brows and bow tied hair accented the collection without being too much of a distraction. The hair and makeup artist she told me that she and Anastasia had been friends for a long time and frequently work together. When I asked if there was a particular inspiration behind the beauty looks she told me that she channeled Chatzka’s style. “Her stuff is fun and flirty and young and hip; it’s beautiful.”

When I found Chatzka after the show she was taking in the success of the show. She told me how elated she was to be doing something she was passionate about, but that the biggest reward was being able to share herself and her vision with the attendees. “We had hundreds of people out there and I was able to share myself with [all of them]. Maybe there were some who didn’t know who I was and they were able to discover who I am. But there were also clients of mine that love what I do and were able to appreciate this beautiful presentation in a beautiful space!”

As I inquired about the inspiration for the collection, hoping for some elaborate view, Chatzka revealed to me its simplicity. “It was Chicago women. You go to work, you go out, and you have weekend clothes and day clothes. The whole collection was designed to be completely ready-to-wear. You could pick up any of the pieces I showed off the runway and wear them tomorrow. They weren’t crazy in the sense of ‘I love it, but how could I wear it?’ Instead it’s ‘I love it; I’m wearing it; I’ll see you tomorrow in it!’ Which is what fashion should be. I mix a lot of colors, prints, and textures in my work to give it that fun element but it’s always very wearable.”

That was made all the more apparent as Chatzka told me her outfit for the evening was a piece from last year’s Spring/Summer collection. It was a gorgeous white dress with a custom floral screen-print; something Chatzka is known for using throughout her collections. Her Miu Miu shoes were a perfect accessory, which are apparently one of the only things Chatzka elects to purchase since she does not design her own.

Who knows what we can expect from Chatzka in the future, although her website suggests the creation of a lifestyle brand which could include lingerie and men’s accessories. One thing is certain; Chatzka will continue to dazzle Chicago’s Fashion Scene for years to come. Be sure to visit her website AnastasiaChatzka.com and check out her store front at 1001 N Damen St. in Wicker Park.