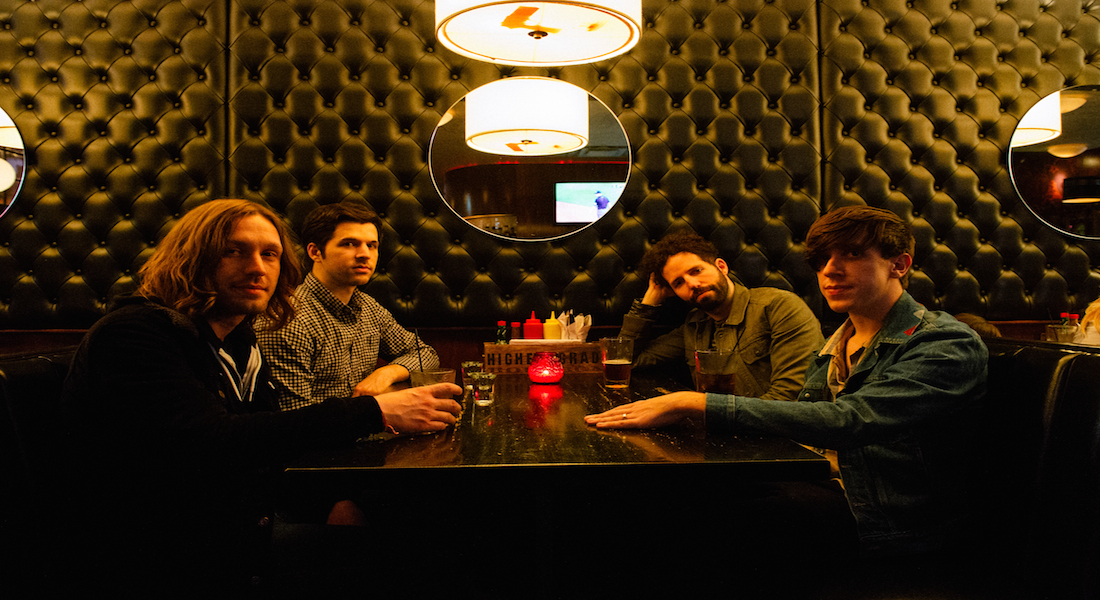 The Kickback. Image Courtesy of The Syndicate.

A Healthy Lifestyle is Made Easy with My Fit Foods 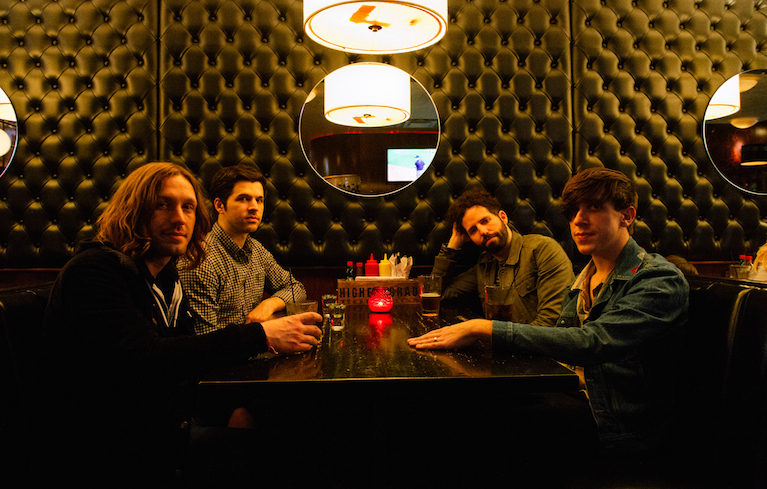 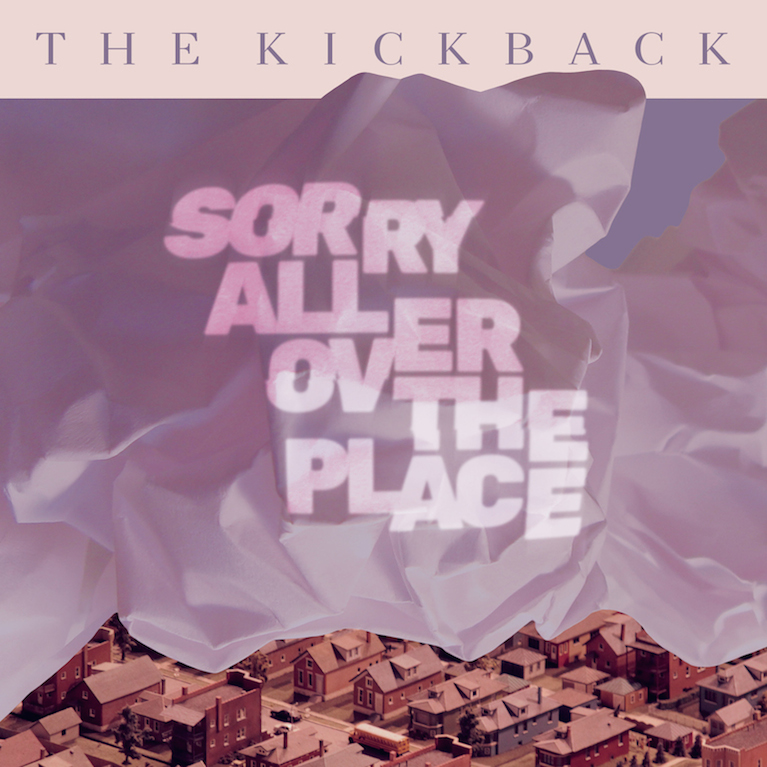 The Kickback. Image Courtesy of The Syndicate.

'Sorry All Over The Place'

Sorry All Over The Place. Image Courtesy of The Syndicate.

‘The Kickback’ frontman talks to us about his band’s new album, the atmosphere at festivals and hopes for the future.

The Chicago quartet are excited for the release of their long-awaited debut ‘Sorry All Over The Place’. For some elucidation, we peered into the mind of guitarist, singer and songwriter, Billy Yost.

Jack Carter Crawley: New album ‘Sorry All Over The Place’ will be released September 18th via Julian records. First off, what’s the title all about?

Billy Yost [pictured far right]: The title is from a book called ‘Infinite Jest’ by David Foster Wallace. There is a list of movies that the protagonist’s father was working on, and one of the unfinished movies was called ‘Sorry All Over The Place’. For some reason I thought it was the funniest title I’ve ever heard- I still love it to death. So I called the album that before we even had the songs for it.

BY: I feel like that’s sort of a Midwestern trait. I’m from South Dakota originally, so the South Dakota/Minnesota region has a stereotype called ‘Minnesota nice’, which is immediately apologetic yet all the while you might be infuriated.

JCC: When and where did you record the album?

BY: It was almost two years ago, we’ve been on this thing for a long time. We recorded it with Jim Eno from the band Spoon (who are one of my favourite bands) and we went to his studio in Austin, Texas. We went down there once for ten days to track and another ten days to mix. We slept with four sleeping bags next to each other- it was a memorable experience that’s for sure.

JCC: Is there a connection to that experience and your podcast, DISASTOUR, the caption below it being ‘This is what a poor band sounds like’.

BY: I think most bands are hemorrhaging money and/or anything good in their lives in pursuit of music. It’s not a great time unless your one of the 1 percent/Top 40 performers- everybody else is just constantly losing to do the thing that makes them live.

JCC: What were your influences for this record- both musically and lyrically?

BY: I was raised on Top 40 music from the 1960s, what we call oldies radio I guess. My mom encouraged me to sing along. It’s kind of how it happened; I guess it’s a stereotype because it’s true. Our stuff gets called 90s influenced a lot, I think that’s just because I love a hook that grabs you by the face. I think that’s what some of the music from the 60s was all about, they had to get you as fast as possible and hook you in.

Lyrically, I like to focus on negative things. Our dance-iest tune is called ‘Scorched Earth Brouhaha’ and it’s about my parents divorce. We have a song about my math teacher whose name was Leo, and it’s about him being the only decent guy left in this little town. We have a lot of songs about fear or anger and I think that’s how I spent a lot of my early 20s.

We are in an age where people in their 20s are able to act like total children- and I’m like the poster boy of that. I don’t know if that’s a good thing or a bad thing but I’d like to quote Fight Club: ‘I can’t get married I’m a thirty year old boy.’ I am married, but I don’t feel like much of a man.

JCC: We really like the album artwork, who produced it?

BY: Eamonn, our bass player, is an illustrator and graphic designer. I am very opinionated and very hard to work with, so he did everything and then I would just say ‘I don’t like this, and I can’t tell you how to make it better’. We went through sixty mock-ups of the album cover- I don’t know how we got through it. It started out with this idea (because I love miniature cities) of having a cloud hanging over a city that was going to swallow everything up or bring some sort of doom and gloom. It makes me happy to know you got something from it because…it took a lot of work.

JCC: We love the visual effect on the design, it looks like it’s coming off the screen.

Whiiite and Love Taps blow the ROOF off theWit in Chicago

BY: We’re really happy with it. My idea was to make it the worst-case scenario of the opening to ‘Mister Rodgers’ Neighborhood’.

JCC: You recently played a festival on Elston Av, how did it go?

BY: I enjoy festival shows because rest assured no one has any idea who we are. I tend to come at people pretty harsh. If I turn some people- that’s my favourite feeling in the whole world. If we’re ever playing in front of thousands of people who are there because they love us and like our music (which has happened in a couple of cities), I don’t really know what to do. We’ve played so many shows on the road where it’s us versus people who have no idea who we are- that’s what I know how to do. I live to turn people, not to be appreciated initially, and then to try and win people over. I really like that, I feel like a professional wrestling villain.

JCC: Are there any particular festival/venues you’re aiming to play in the future?

BY: Glastonbury was a festival I knew very early on, that would be an amazing one someday. Here in Chicago, to be able to play the Metro not as a supporting band would be huge.

I think we’ll be doing an album release at Schubas because it was such a big deal for me the first time we were able to get in there.

JCC: Have you got anything else lined up, both in the studio and on the road?

BY: The only benefit of sitting on this [the new album] for so long is that we’ve built up an awful lot of music. It’s really exciting for us. It’s our first adventure with a label, with a booking agent- the whole professional side of music. It’s something I’ve been waiting for since I was eighteen.